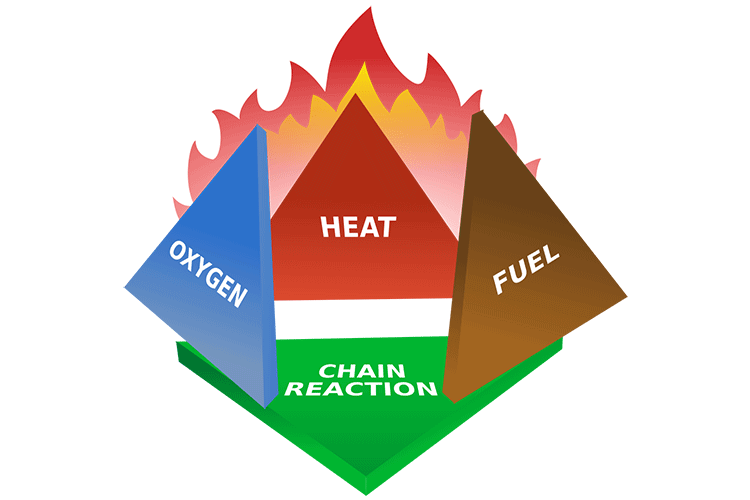 What Is the Fire Tetrahedron? 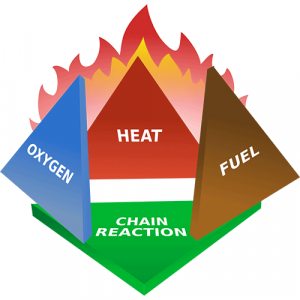 The Triangle of Combustion symbolised the concept of fire for a long time and represented heat, fuel, and oxygen. Further research into fire led to the conclusion that a fourth element was a necessary component of fire, which is a chemical chain reaction. The fire triangle was subsequently changed to a fire tetrahedron (also referred to as fire diamond, pyramid, or combustion triangle) to reflect the fourth element.

A tetrahedron is best described as a pyramid, which is a solid with four plane faces. All the four elements essentially must be present for the occurrence of fire i.e. oxygen, heat, fuel, and a chemical chain reaction. If you remove any of the essential elements, the fire will be extinguished.

The four elements are oxygen for sustaining combustion, enough heat for raising the material to the ignition temperature, combustible material or fuel, and a subsequent exothermic chain reaction in the material.

The symbol might seem simplistic, but it is a great analogy, how you can theoretically put out fire through the creation of a barrier using foam for example and starving the fire of oxygen.

If you apply water, you lower the temperature below the ignition temperature or in a flammable liquid fire through the diversion or removal of the fuel. Interfering with the chemical chain reaction through the elimination of free radicals using BCF and other halon extinguishers also leads to the creation of an inert gas barrier.

What Is the Fire Triangle? 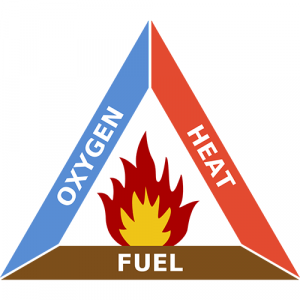 The combustion triangle or fire triangle is the three components required for igniting and sustaining a fire. Oxygen, fuel, and heat are the three ingredients of a fire triangle.

The combustion triangle or fire triangle might seem like a simple concept, but it is a scientific principle that all people need to know. Understanding how fire is able to sustain itself is important background information in situations where you need to use fire safety equipment.

If even one of the components is removed, the fire triangle collapses and the fire is extinguished.

Let us explore the components in detail:

A heat source is necessary for ignition to occur and different materials have different ‘flash points’ or the lowest temperatures at which they can ignite.

Combustion reactions, however, also produce heat as they burn, which further increases the fuels’ temperature. The heat may be cooled by applying water, but this is only possible for some types of fire.

Fire cannot start if there isn’t any material available to burn. Businesses and homes alike are full of flammable materials including fabrics, wood, oil, and paper. Any of these materials can serve as fuel for a fire.

Some of the materials burn more easily compared to others. Fuel is probably the hardest ‘side’ of the fire triangle you can remove, so it is advisable to ensure that they are appropriately stored so that they don’t become a fire hazard.

Oxygen is needed to sustain the combustion reaction since it reacts with the burning fuel to release carbon dioxide and heat. The atmosphere of the earth consists of 21 per cent oxygen, which means that there’s enough to trigger a fire as long as the other two components are present.

Some fire extinguishers and fire blankets remove the oxygen ‘side’ of the triangle by displacing or removing it thus causing suffocation and ceasing the combustion reaction.